A History of Flamenco & her recipe of passion 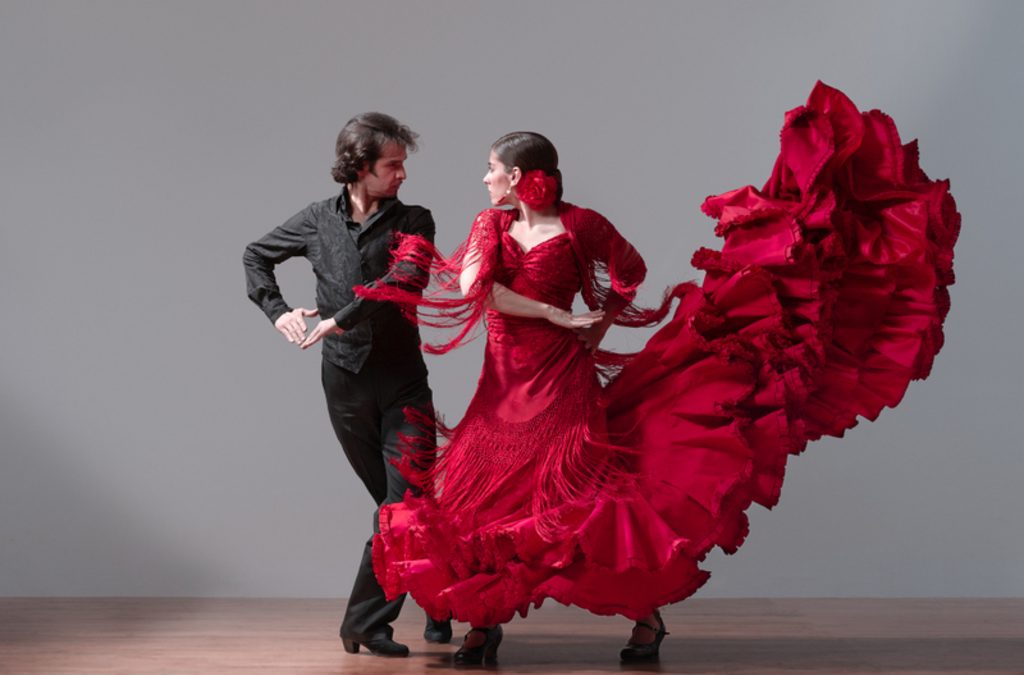 Long before it became a national symbol this combined art form of music and dance, born of Gypsies or Romanies, has been embraced by both nationals and foreigners for many years. If you think you’ve felt passion, then think again because the true meaning of passion can be found in the exotic, not only of the human form, but also that of an historic culture found in the heart of Andalusia – Flamenco!

The historical path of Flamenco through the ages

The historical origin of this dance and state of passion can often be argued to have originated from several parts of the world and yet we find it here in the South of Spain, dating back nearly five hundred years!

Although we discover that it’s part of the Spanish culture, it was truly influenced by Latin America, Cuba, the Jews, the Romans and the Moors. Nomadic gypsies from the 15th century danced into the woven tapestry with new rhythms and musical instruments, but latterly, it remains synonymous with the Spanish guitar.  However, when the guitarist plays for a Flamenco dancer, the guitarist is entrusted to follow the dancer, yet the dancer must have clear technical structure changes in order for the guitarist to fully comprehend his or her musical interpretation, as both flow like a tributary into the ever-flowing river of Flamenco passion.

Any performance by the artist is undoubtedly a do or die version, because the artist has to create a connection with the audience – if not then the artist fails. Original Flamenco was comprised purely of singing or cante and handclapping. A distinct shout as well as a type of tribal melody, with the all-essential toe and heel clicking, finger snapping and hand clapping …the songs are passionate, intense, truly deep and emotional. It wasn’t until the 19th century that the guitar was incorporated following the spread of Flamenco to Madrid and other parts of Spain, flourishing as a result in the rise of the mass urban culture and an increase in foreign travellers, but at its heart Flamenco was always true to Andalusia.

Flamenco was the stone in the shoe for the hierarchy of elite Spanish families and their friends. They looked upon the Romanies, with disdain blaming them for how the world would imagine Spanish life, having declined in its status on the world stage, because at that time Spain wasn’t the powerful empire it once was. Between 1875 and 1936, the critics of Flamenco were to be found in The Catholic Church, politicians and other revolutionary leaders from the workplace. Following the tragedy of the Spanish Civil War, from 1936 to 1939, the diminishing performances of Flamenco were apparent. However, its various critics tried to undermine and banish it, for its perceived evil, it wasn’t to be as Spain economic fortune dictated that in the time of Franco, Spain need to embrace its tourists. Franco and his regime realized how much the tourists were enthralled by Flamenco and thus an increased number of establishments were allowed to perform again once more. Knowing the value it would bring, the drive to in fact promote Flamenco went above and beyond, including the Hollywood film industry.

Various strategies came to fruition and Flamenco’s passion could never be dimmed and so nothing, however powerful would be able to remove Flamenco’s heart and passion and the artists who breathed it.

The true Queen of Flamenco

One such artist never failed to bring passion to the hearts of her audience. The most famous Flamenco Queen of all was Carmen Amaya, who called herself a Gypsy, a derogatory term for most and more so, the Romani people.

We should indeed refer to Carmen as a Romani or more specifically – Calé. Have you ever heard the term Gitano? It’s Castilian Spanish for Gypsy. Historically the Calé are descendants of the Romani tribe whose origin formed in the Andalusian province of Southern Spain. Due to Flamenco’s origin, it is a diverse dance that blends a myriad of cultural influences incorporating its passionate singing and vibrant musical notes which wander back to the Punjabi singing of India, the guitar strings of Persian Zyriabs, the classical Andalusian orchestral chords from the Islamic Empire, chants from the Jewish Synagogue, Arabic Zayal, Andalusian folk songs, Mozarabics the converted Islamics and Central and South American colonies. Historically, the magnitude of these cultures and music have greatly influenced the entire region of Andalusia as a whole.

It is no surprise that the ancestors of Flamenco enriched its descendants with a genetic compass, filled with magical ingredients blending richly over the centuries, arriving in a whirlpool of passion, which as soon as your ears engage… your heart will follow aimlessly into a steamy love affair with music and dance.

Flamenco – Part of its passion is fashion

Flamenco clothes were traditional Andalusian, originating from the Spanish gypsies in the 19th and 20th century and being a strong art form, dominant colours such as black, red and white have been at the forefront of many designer’s creations.

From the beginning of time, a woman’s figure and shape has been the essence of Flamenco, where artists are able to express passion, femininity and soul when dancing the Flamenco. In the world of Haute Couture, Dolce & Gabana, with the added essence of being Italian (!), are probably the masters at marrying the theme of Flamenco with runway creations which we’ve seen in past years. They have been inspired as all designers are by cultural and historical genres. Sculpted silhouettes & flattering frills sported with hot vibrant red, dazzling ocean blue and wild vivacious yellow fabrics are often seen dancing through the old town squares late into the night during Feria season here in Andalusia – the most famous of all the historical homes of Flamenco.

At feria time head for Sevilla, if you want to experience Flamenco passionately worn on hot summer days & nights, it will be nowhere more so than in Andalusia’s capital where you’ll feast your eyes upon the Romani women dressed in calico gowns with ruffles. It’s truly the time for both ladies & gentlemen and their families to join together in wearing this beautiful Spanish tradition.

On a final note – World Culture

Flamenco, which UNESCO recently recognized as part of the World’s Intangible Cultural Heritage can truly be described as an exotic art form involving poetical singing (cante), guitar playing (toque), dance (baile), polyrhythmic hand-clapping (palmas) and the irresistible knack of finger snapping (pito). The response to all of this complexity of communication is known as jaleo, where all hell lets loose with hand clapping, foot stopping and encouragement participation from the audience. So please, the next time you stumble upon a Flamenco performance do join in and you’ll never feel the same again!

There has been a profound historical study undertaken of Flamenco – the actual art form and also both its artistic and historical importance for Andalusia, its home and Spain, it’s ruler. The way in which Flamenco has survived, thanks to cultural and commercial reasons demonstrates its complexity, its nationality and its respect as an art form, from nations around the globe.